I recently added the parsing of encrypted PDF files to the Caradoc project. This feature is already available in my development branch on GitHub (this implementation is still experimental but should work for most files). I want to give some feedback about it, by describing and analyzing the standard encryption scheme of PDF.

Throughout this post, I assume that you are familiar with PDF syntax. If this is not the case, I encourage you to read my introduction to PDF syntax.

This post is only based on the PDF reference (ISO 32000-1:2008), but additional encryption algorithms were defined in the ExtensionLevel 3 (an extension of Adobe available here). Besides, I only deal with symmetric-key cryptography, although a public-key cryptographic scheme is also supported by PDF.

PDF encryption: why and how?

Encryption was first introduced in version 1.1 of PDF. Initially, only the RC4 encryption algorithm was supported with keys of only 40 bits (because of export restrictions on cryptography at that time), but the key length was extended up to 128 bits in version 1.4 and AES is supported since version 1.6. As we will see, the MD5 hash function is used in various algorithms, for example to derive cryptographic keys from passwords.

Encryption is defined in section 7.6 of the PDF reference and spans 15 pages, but I endeavor to summarize the main ideas in this post. Encryption serves mainly two purposes in PDF:

Contrary to what one would expect, encryption is not done at document level but at object level, and more precisely only strings and streams are encrypted. This means that for example you can retrieve the number of pages of an encrypted document. Some metadata may even be present in clear, thanks to fine-grained control over which objects are encrypted and which are not. This fine-grained encryption is even advertised by Adobe as a practical advantage compared to file-level encryption, although it does not seem to increase security…

Encrypted PDFs contains at their root a special dictionary that stores the necessary elements to decrypt the file. Among others, this /Encrypt dictionary contains the following fields:

It also contains fields to specify the key length and other information, omitted here for simplicity.

When a PDF reader detects that a document is encrypted, it prompts the user for a password and uses the checksum values to choose to further process the file or reject the password. The software may also try a default empty password before prompting the user. This is intended for reading seamlessly DRM-protected files, for which the user password is left empty (whereas the owner password is secret to enforce DRM).

Computation of keys and checksums

Given the user password Pu​, the owner password Po​, the permission flags P and the document ID, some ad-hoc algorithms allow to compute encryption keys Ka,b​ and to verify the checksum values U and O. I describe these algorithms A to E in the following sections. The following figure summarizes the flow of inputs and outputs between them. 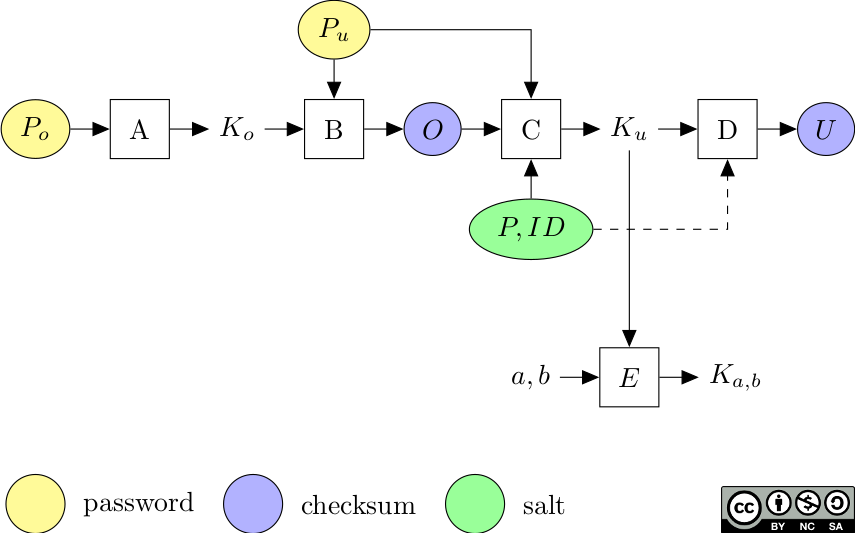 Derivation of encryption keys from passwords.

These algorithms depend on a constant value padding, shown here in hexadecimal. How this value was generated is unspecified.

In the following sections, I use the following notations. Given a string X and an integer n, [X]n​ means the first n bytes of X (this is also written [X]_n in pseudo-code). The concatenation of two strings X and Y is denoted by X∣∣Y. The padding function is defined by pad(X)=[X∣∣padding]32​ ; in other words, padding is appended to X and the result is trimmed to 32 bytes.

(A) Derivation of the owner key from the owner password

For a key length n, Ko​ was computed as a MD5 hash of the password (with padding and trimming) in the early versions.

(B) Encryption of the user password into the owner checksum

The owner checksum O is an encrypted version of the user password Pu​ using the owner key Ko​.

In the early versions, a simple RC4 encryption was used.

At each iteration, the key is slightly modified: the notation K_o ^ i means that each byte of K_o is XOR-ed with the counter i. The key is different for each round because RC4 being a stream cipher, encrypting a second time with the same key cancels the first encryption.

(C) Derivation of the user key from the user password

The user key Ku​ is the main encryption key and is sufficient to decrypt the whole file. It is derived from the user password Pu​, the owner checksum O, the permission flags P, the document ID and the key length n as follows.

In the early versions of the algorithm, the loop that rehashes 50 times was not present.

(D) Verification of the user key

The user key Ku​ allows to compute the user checksum U. If this value matches the ∕U field of the encryption dictionary, PDF readers proceed to decrypt the file.

In the early versions, U was simply an RC4 encryption of the padding constant by the user key.

The more recent versions also make use of the MD5 hashing algorithm, and use more rounds.

First conclusions about the scheme

We have seen that the derivation of keys and checksums from passwords is quite custom and inconsistent. First, derivation of the user key Ku​ uses a salt (the document ID) whereas derivation of the owner key Ko​ does not. Second, the hash is trimmed at each round to compute the user key Ku​ whereas it is only trimmed in the end to compute the owner key Ko​. Also, these algorithms rely on cryptographically insecure primitives as of today: the MD5 hash function and the RC4 stream cipher.

Besides, the computation of O depends only on the passwords Pu​ and Po​ (it is not salted for example by the document ID). This makes the scheme subject to precomputation attacks to retrieve the passwords (e.g. using Rainbow tables), especially because the owner password defaults to the user password if only one of them is provided.

In essence, PDF encryption is weak for the two main use cases:

Also, a precomputation attack can be mounted to efficiently retrieve low-entropy owner passwords Po​ used for DRM (in which case Pu​ is empty). Hence, DRM protection as it is implemented in PDF is not only useless against a determined attacker, but it can also expose a low-entropy owner password Po​: this can be detrimental to security if this password is reused for other sensitive services.

Now that we have explored the key derivation and verification algorithms, let’s see how the content itself is encrypted.

First, encryption only applies to strings and streams. This means that from a general point of view, an encrypted file has the same structure as a regular file: it is made of indirect objects that themselves contain streams, dictionaries, arrays, numbers, names or strings. However, the sequence of bytes that constitute each string or stream’s content is encrypted individually.

Several encryption primitives are supported in the standard encryption filter: the RC4 stream cipher and the AES block cipher in CBC mode. Besides, each object is encrypted with a distinct key.

(E) Construction of an object key

Let’s consider an indirect object with an object number a and a generation number b. All the strings and streams contained in this object are encrypted individually with the object key Ka,b​. This key is computed as follows from the user key Ku​, where n is the key length.

Defining distinct keys for distinct objects is natural if one uses a stream cipher (such as RC4), because stream ciphers are insecure in case of key reuse. However, this is not properly implemented by PDF because the same key is reused for all the strings in a given object.

Encryption of a string or stream

Let P be a plaintext string or stream to be encrypted with Ka,b​. The associated ciphertext C is computed as follows.

We first note that even though each object has its own key, all the strings that belong to the same object are encrypted with the same key. In the case of RC4, this means that they are encrypted with the same keystream, and guessing part of a plaintext allows to recover part of the other strings/streams in the same object. Security of stream ciphers is greatly reduced when a key is reused.

Besides, the context of each encrypted item allows an attacker to guess part of the plaintext (for example a string in a date field is expected to be encoded in a specific format).

More importantly, none of these encryption algorithms provide authentication and integrity of the data. This is in particular problematic for stream ciphers (such as RC4), which are easily malleable.

Regarding DRM, there is no guaranty against someone who knows the user password (which is necessary to read the file anyway). The fine-grained level of encryption with object-dependent keys only slightly hinders someone determined to unlock the permissions (but this is mostly security through obscurity). The fact that the specification describes each key-derivation algorithm with verbose text when a few lines of code would be much clearer might also help repelling the script kiddies. But another consequence is the thrive of dubious software such as « secure PDF unlocking » online services.

Pitfalls of PDF parsing and guidelines for file formats
Lessons learned from stracing a password manager in Docker
Asynchronous streams in Rust (part 1) - Futures, buffering and mysterious compilation error messages
Advent of Code in Rust: lessons learned
And 20 more posts on this blog!