In popular belief, PDF is often seen as an obscure binary format that is almost impossible to modify. This is partly true, in the sense that the format is so complex that it would take years as a full-time job to fully understand it.

However, it is possible to parse, analyze and validate PDFs, and these were the objectives of the Caradoc project. After my work on this project (still in progress), I am starting a series of posts to demystify the Portable Document Format and share some relevant feedback. In this first post, I give an overview of the PDF syntax.

From a historical perspective, PDF stems from PostScript, a vector graphics format born in the 1980s. The first PDF reader was released in the early 1990s, and PDF was later formalized as an ISO standard (number 32000-1) in 2008. This means that a PDF specification was published, and you can indeed find a copy on Adobe’s website.

After downloading this document (itself delivered as a PDF file!), you can have a nice 756-page reading, or just lazily follow my summary blog posts. The specification is sometimes quite verbose, but the section titles are mostly self-explainatory, so we will start this journey at section 7 (Syntax).

Contrary to what people expect, PDF is before all a textual file format, whose syntax is mostly inherited from PostScript. This means that a human could in theory write or read it manually, but I don’t know many people who do it with real files.

In practice, the textual nature of PDF means that bytes are grouped into several character classes:

A PDF document is structured into objects. Think of these objects as JSON (RFC 7159), but with a different syntax. They are composed of the following data types.

Additionally, one can insert comments, starting with a percent sign % and finishing with an end-of-line marker (\r, \n or \r\n).

Basic objects already provide an expressive language, but the format also defines indirect references, that can be viewed as pointers between objects. This is useful for several reasons:

We can then refer to this object by using an indirect reference, represented by 1 2 R.

The syntax is as follows.

Now that we know how to create objects, we can move on to the file layout, that is how to organize these objects in a file. A basic PDF file contains the following elements: 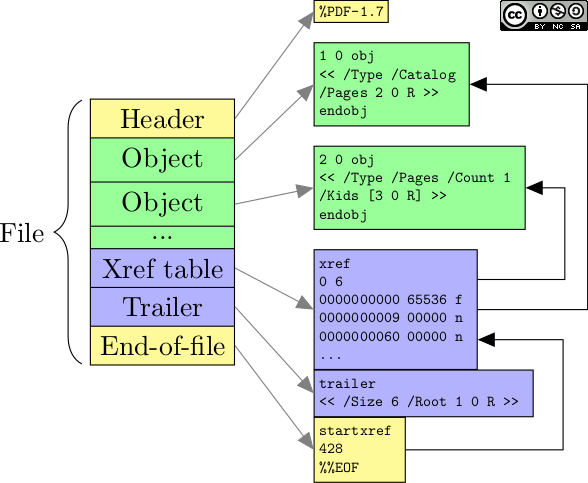 Layout of a simple PDF file.

With these elements, it is already possible to create a simple file, and a full « Hello world » file looks like this (here on GitHub). In this example, there are 6 indirect objects, which is roughly the minimum for a conforming file.

Major evolutions of the structure

The first PDF reader was released about 25 years ago. Since then, the format has evolved and the specification has known eight major versions: from 1.0 to 1.7. During all this time, many new features appeared (multimedia support, JavaScript integration, etc.). But the format also evolved at a syntactic level, to cope with more use cases. I will now describe the major syntactic structures that differ from the basic structure.

Incremental updates: who said that PDF was read-only?

Contrary to popular belief, PDF is not meant to be a read-only file format. The specification allows to modify a file by appending new content to it. To implement this, you need to append the following elements to the file: 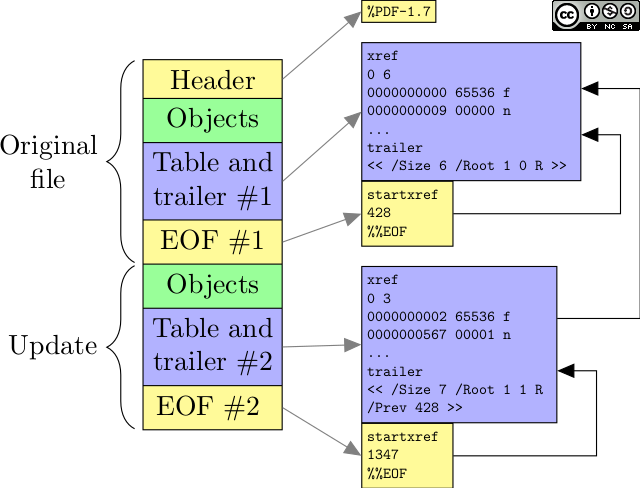 Structure of a file with an incremental update.

It is also possible to append several incremental updates, in which case the xref tables and trailers will form a chain. In practice, PDFs with 2 or 3 xref tables are common, and some files found in the wild even have dozens of updates!

As I mentioned earlier, PDF is a textual format, which means that its content is verbose and not optimized for small file size. To tackle this problem, version 1.5 introduced the notion of object streams. An object stream is simply a stream that contain other objects in its data segment. Because streams support compression algorithms such as Deflate, the size can be reduced. Consequently, this feature is very popular. In practice, an object stream often contains dozens to hundred of objects.

Layout of an object stream.

In the same spirit, xref streams were introduced to compress xref tables: in that case the table is contained in a stream. The trailer will directly indicate the offset of the xref stream, so that we can decode the file. Note that the xref stream being an indirect object, there is an offset for it in the xref table (i.e. in itself), which introduces a form of vicious circle!

Linearization: read me on the web!

As explained earlier, the root of the document is located at the end of the file. This means that when a software reads a PDF file, it must first fetch the xref table at the end, and then it knows where to find the objects. This is problematic in a networking context, because nothing can be rendered before a file is downloaded entirely. The delay can be important, especially for files that contain hundreds of pages or a lot of high-resolution images, or for users with a slow Internet connection.

To counter this problem, another structure was introduced by version 1.2: linearization. The file layout is slightly modified, by introducing the linearization dictionary, an object located at the beginning of the file. This dictionary points to hint tables, that play a role similar to an xref table (but using a totally different syntax). Besides, objects related to the first page and the document root are all placed near the beginning of the file.

This way, a PDF reader in a web browser can recognize the linearization dictionary, fetch the hint tables and render the first page quickly. Downloading continues while the user reads the first page of the document. Once the download is finished, the user can read the full document.

However, linearization is added in parallel to the regular structure. This is to allow any PDF reader to parse the document, even if it does not support linearization. This also means that linearization introduces redundancy and complexity to the file layout. For example, hint tables are redundant with xref tables. Following is a (simplified) sketch of a linearized layout. 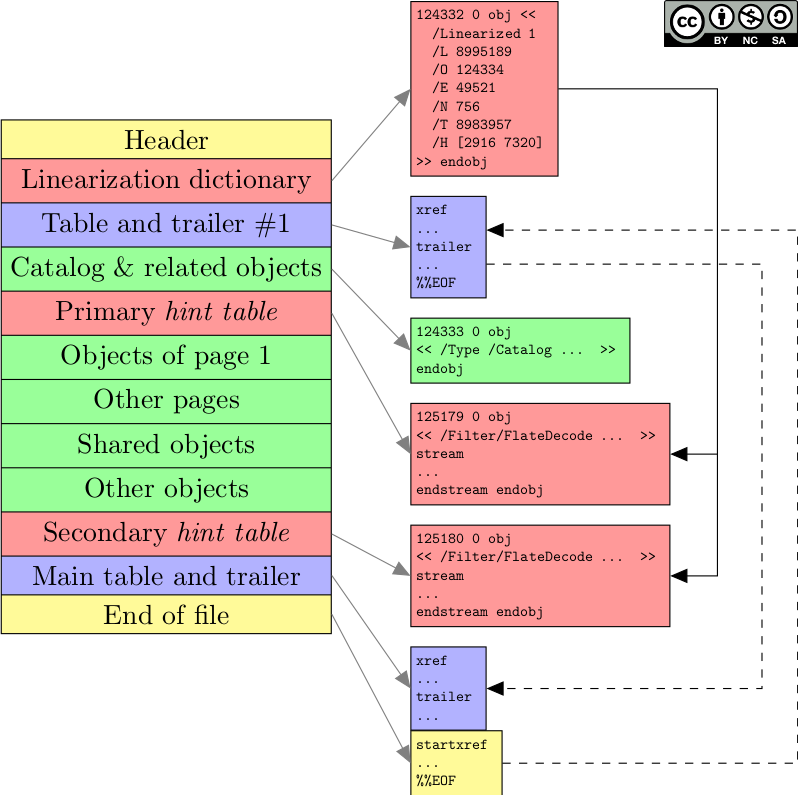 Structure of a linearized PDF.

You can see that a PDF file can be quite complex, and there is a lot to say about this syntax regarding security and performance, but I will discuss that in more detail in other posts.

I hope that this short introduction to PDF syntax was useful! For those who want to learn more about it, stay tuned because other posts are coming soon. In the meantime, you can read the paper about Caradoc that I presented at the 3rd LangSec workshop. It contains complementary details about the syntax, along with some examples of parsing discrepancies between PDF readers.

I also suggest the following resources about PDF:

Pitfalls of PDF parsing and guidelines for file formats
Syntax and validation of PDF graphics
How secure is PDF encryption?
Asynchronous streams in Rust (part 1) - Futures, buffering and mysterious compilation error messages
And 20 more posts on this blog!

Previous Welcome to my blog! Next Pitfalls of PDF parsing and guidelines for file formats